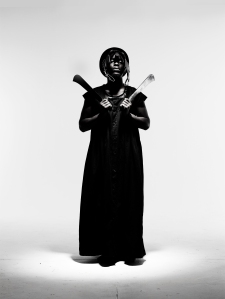 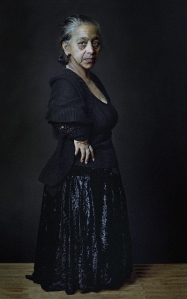 In conjunction with Louisville’s Photo Biennial, 21c Museum will present a trio of exhibitions exploring contemporary photography from around the world.
Pierre Gonnord, Portraits, October 4-March 15, 2014
Lobby Gallery
The lobby gallery will feature Pierre Gonnord, Portraits, the acclaimed French photographer’s first solo museum exhibition in the United States. Large-scale, highly detailed, and dramatically lit, with dark, blank backgrounds; Gonnord’s images recall the paintings of Goya, Caravaggio, Velasquez and other old masters. Gonnord’s subjects belong to communities on the margins of conventional society—homeless urban youth, gypsies, tattooed Japanese gang members, miners’ families in rural Spain. Gonnord’s art transforms each into a vision of compelling, unexpected beauty and dignity. Face to face with the viewer, these evocative, eloquent portraits are intended, says the artist, “to narrate unique, remarkable stories about our era. Sometimes hostile, almost always fragile, and very often wounded behind the opacity of their masks, they represent social realities and sometimes another concept of beauty.”
Mohau Modisakeng: Personal and Political, October 4-March 15, 2014
Galleries 1 and 3
Mohau Modisakeng uses self-portraiture to explore his identity as black man in post-apartheid South Africa. Trained as a sculptor, Modisakeng now also works in film, photography, and performance, addressing the history of his country, and revealing, in sharp, dramatic contrast, complex and challenging issues. “The main message behind my work has to do with the influence of the history of violence on how we understand our cultural, political, and social roles as human beings,” explains the artist. “The hope is to reveal how power is manipulated to change how we relate to our bodies.” Modisakeng’s large-scale photographs are printed on watercolor paper, which lends richness and depth to the black figure and white, blank background, suggesting a solidity of form akin to sculpture. The costumed figure carries various props, which could also serve as weapons, alluding to the experience of violence that the artist has both experienced and inherited. One such object is the Dikubu, a cattle prod commonly referred to as a Sjambok in South Africa, which was originally made of Hippopatumus hide, but now is commercially produced in plastic. The Dikubu symbolizes authority, oppression, and ownership of resources–aspects of South Africa’s past and present, which the artist believes must be confronted in order to envision a new future. Born in Soweto in 1986, Modisakeng’s first solo exhibition in the U.S. is being presented at 21c Louisville during the 2013 Photo Biennial.
Bill Luster, A Retrospective, through April 2014
Proof on Main
“Photography,” says award-winning Kentuckian Bill Luster, “is the greatest time machine invented. It shows us context, space, and those that love us and have loved us.” This retrospective exhibition features Luster’s land and cityscapes, portraits, and travel photographs, captured during the course of a five-decade career based in Louisville. The ever-blurring boundaries between photojournalism and photographic art are Luster’s rich domain: here, racing saddles resemble the repetitive forms of minimalism; the snaking lines of railroad tracks at dusk become a vision of neon lights, frozen in momentary stasis; fantastical cloud shapes, swaths of purple road, carpets of grass, an urban street shimmering gold in the glow of diffuse light illuminate a dream world. A featured exhibition of the 2013 Photo Biennial, Luster’s retrospective remains on view at Proof on Main through April 2014.
Address: 700 West Main Street, Louisville, KY, 40202
Phone: 502.217.6300
Toll-free: 877.217.6400
Fax: 502.217.6301
next participant